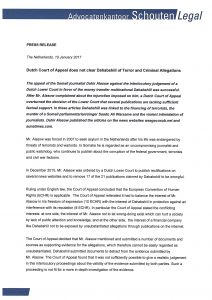 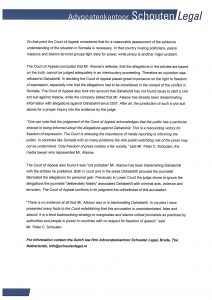 The appeal of the Somali journalist Dahir Alasow against the interlocutory judgement of a Dutch Lower Court in favor of the money transfer multinational Dahabshiil was successful. After Mr. Alasow complained about the injunction imposed on him, a Dutch Court of Appeal overturned the decision of the Lower Court that several publications are lacking sufficient factual support. In these articles Dahabshiil was linked to the financing of terrorists, the murder of a Somali parliamentarian/singer Saado Ali Warsame and the violent intimidation of journalists. Dahir Alasow published the articles on the news websites waagacusub.net and sunatimes.com.

Mr. Alasow was forced in 2007 to seek asylum in the Netherlands after his life was endangered by threats of terrorists and warlords. In Somalia he is regarded as an uncompromising journalist and public watchdog, who continues to publish about the corruption of the federal government, terrorists and civil war factions.

In December 2015, Mr. Alasow was ordered by a Dutch Lower Court to publish rectifications on several news websites and to remove 17 of the 21 publications claimed by Dahabshiil to be wrongful.

The Court of Appeal decided that Mr. Alasow mentioned and submitted a number of documents and sources as supporting evidence for the allegations, which therefore cannot be easily regarded as unsubstantiated. Dahabshiil submitted documents to detract from the evidence submitted by Mr. Alasow. The Court of Appeal found that it was not sufficiently possible to give a realistic judgement in this interlocutory proceedings about the validity of the evidence submitted by both parties. Such a proceeding is not fit for a more in-depth investigation of the evidence.

On that point the Court of Appeal considered that for a reasonable assessment of the evidence understanding of the situation in Somalia is necessary. In that country rivaling politicians, peace missions and Islamic terrorist groups fight daily for power, while piracy is another major problem.

The Court of Appeal concluded that Mr. Alasow’s defense, that the allegations in the articles are based on the truth, cannot be judged adequately in an interlocutory proceeding. Therefore an injunction was refused to Dahabshill. In deciding the Court of Appeal placed great importance on the right to freedom of expression, especially now that the allegations had to be considered in the context of the conflict in Somalia. The Court of Appeal also took into account that Dahabshiil has not found cause to start a civil tort suit against Alasow, while the company stated that Mr. Alasow has already been disseminating information with allegations against Dahabshiil since 2007. After all, the jurisdiction of such a civil suit allows for a proper inquiry into the evidence by the judge.

“One can note that the judgement of the Court of Appeal acknowledges that the public has a particular interest in being informed about the allegations against Dahabshill. This is a resounding victory for freedom of expression. The Court is stressing the importance of media reporting in informing the public. In countries like Somalia with so many problems the vital public-watchdog role of the press may not be undermined. Only freedom of press creates a fair society,” said Mr. Peter C. Schouten, the media lawyer who represented Mr. Alasow.

The Court of Appeal also found it was “not probable” Mr. Alasow has been blackmailing Dahabshiil with the articles he published. Both in court and in the press Dahabshill accused the journalist fabricated the allegations for personal gain. Previously in Lower Court the judge chose to ignore the allegations the journalist “deliberately falsely” associated Dahabshill with criminal acts, violence and terrorism. The Court of Appeal confirms in its judgment the unlikeliness of this accusation.

“There is no evidence at all that Mr. Alasow was or is blackmailing Dahabshiil. In my plea I have presented many facts to the Court establishing that this accusation is unsubstantiated, false and absurd. It is a lewd badmouthing strategy to marginalize and silence critical journalists as practiced by authorities and people in power in countries with no respect for freedom of speech,” said